It has come to my attention that my nieces and my nephew have NO clue that the previous post actually refers to a song, so here you go.

There are multiple other renditions of this, and granted, the video quality on this one leaves a lot to be desired, but it was too good to pass up.

If you want to try another one...

...very reminiscent of HCS Pep Band days. Pretty sure we didn't ever dance that much... probably should have... :-)

They can call me AL 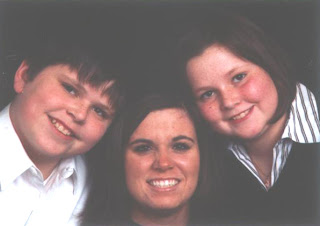 Random at its best

I am sure I am becoming more and more random as each day goes by! The joy of that is, the more random I am, the less I worry.

It's a little like being a toddler. You know that game you play with munchkins - out of sight, out of mind? Yep, that's me. The good part is, I forget things so quickly that I don't have time to worry about them. The bad part is when it was something I was supposed to remember... it's almost like I need to leave a trail of bread crumbs to help me get back to reality!

I had no less than 3 or 4 times today when I needed to figure out how to recover from forgetting things!! Hmm... I didn't remember: location of the pop key, concerts for which I have tickets, groups coming in after hours that I locked out... and that is just what I remember now!

Thanks to all of you who live life in my proximity - I am sure it can be frustrating at times. To me, you all have unlimited patience when I am at my most forgetful!

So here's to all of us who need reminders to come in out of the rain. For the rest of you, you should try walking in the rain sometime. It's great fun, or at least I think that is what I remember. :-)
at 11:53 PM No comments:

"Today is the first day of the rest of your life."

Once more, I have great time on my hands on vacation, and that was the thought that popped into my head this morning. When I did a tiny bit of research on Hoffman and Dederich, I found out that both of them struggled with very intense things in life - Hoffman died as an apparent suicide; Dederich struggled with substance abuse through a large portion of his life.

The quote reminds me of Philippians 3:12-13 - ...I press on to possess that perfection for which Christ Jesus first possessed me. No, dear brothers and sisters, I have not achieved it, but I focus on this one thing: Forgetting the past and looking forward to what lies ahead, I press on to reach the end of the race and receive the heavenly prize for which God, through Christ Jesus, is calling us. (NLT)

Maybe it is a part of the New Year's resolution mindset which is still present two whole weeks into 2008, or maybe it is that birthday introspection stuff, but in the end, I keep coming back to basics - today, I have an opportunity to cultivate a relationship with the Creator God of the Universe, who loves me enough to sacrifice Himself on my behalf. What greater pursuit could there be?

When I was 40, I never would have guessed where my life would be now - but I got to this place through a series of one-day-at-a-time decisions, attempting just to follow what I knew to be truth that day. There is a lot of forgetting that I have done, and there will likely be many more things as the years pass that I will desire to forget. But, today is the first day of the rest of my life, and by grace alone, I have opportunity to forget and to press on. God help me to do that.
at 11:55 AM No comments:

From Wikipedia:
"Red States and Blue States refer to those states of the United States of America whose residents predominantly vote for the Republican Party or Democratic Party presidential candidates, respectively. The term began to emerge in mainstream political discussion following the 2000 presidential election. However, the term gained ubiquitous status after the 2004 presidential elections.(See Origins of current color scheme) Since then, usage of the term has been expanded to differentiate between states being perceived as liberal and those perceived as conservative. A blue state may therefore be any state leaning towards the Democratic ticket while a red state may be any state leaning towards the Republican ticket."
My question is, who determined that Chunky peanut butter should have a blue cap and that Creamy peanut butter should have a red cap? Or at least that seems to be the "usual" for generic or store brand jars, in addition to Jif.

Just for the record, Skippy uses dark blue and light blue lids, while Peter Pan uses yellow and red. Does this mean that most generic peanut butter is Jif in disguise? (Can you tell I am on vacation?!)

I am finally ready to admit that I turned fifty years old this week. And, I lived to tell about it. :-) It was a little like when we all waited for Y2K to roll around and we wondered if life would ever be the same afterwards. And, it was.

Well, I do know that the next day came and went just like all others before. That's the good part. What will the year bring? That is yet to be seen. But, I am thankful for family and friends near and far who helped me celebrate "gently."

I liked the advice of a friend who told me I should make a big deal of my own birthday. Her comment was, "The older we get, the more likely we can get away with this behavior all the time." I think she is very right. Then, there was the other friend who encouraged me this week to cultivate a childlike spirit - one that is unfettered by the worries of life as we grown-ups know it to be. I think both of them are correct. :-)

So, I am vacationing a little to stretch out the celebration. After all, I will only turn 50 once!
at 4:43 PM No comments: