Thanks so much for your prayers these past two weeks. We were able to complete our planning tasks and had two good days of orientation with new paid staff members during Endeavor. I left Florida yesterday and spent the night with a friend in the Atlanta area. Very grateful for a "comfortable" day of weather and traffic. I'll be driving again today, so would appreciate your prayers.

Wycliffe USA President Bob Creson and his wife, Dallas, wanted to share their greetings. Click on the photo or link below to hear about some of the things God has accomplished in 2017. Let's rejoice together! 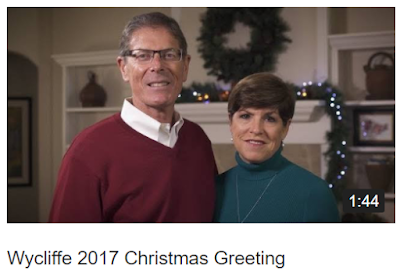 Merry Christmas to you! Praying your December has had (or will have in the coming days) a good blend of worship and celebration and rest and service and family and friends. I'm especially thankful this year for relationships that God has given. I look forward to catching up with many of you during the next two weeks.
at 5:31 AM No comments:


Wycliffe translators Jeff and Peg Shrum moved to Mozambique in 1996. During their early days there, they surveyed the area to determine which language group would be best for them to join. They then moved into the Takwane area and began language study. By 1998, Jeff and Peg had formulated the Takwane alphabet for this previously unwritten language. Providentially, they had all the tools necessary to produce the first published work in Takwane, a translation of part of Luke 2, just in time for Christmas. Imagine hearing about the birth of Jesus for the first time in the language you have spoken since childhood!

Luke 2:14, NLT “Glory to God in highest heaven, and peace on earth to those with whom God is pleased.”

I met Jeff and Peg at Faith Church while they were in the US for a time (2000). They returned to Mozambique and continued working with the Takwane churches and other partner organizations. Before they left Mozambique in 2014, audio recordings of many Bible stories, the JESUS Film (2006), the final books of the Takwane New Testament (2014), and audio recordings of the entire New Testament, Genesis and Exodus (2014) were completed. After typesetting and printing, in 2016, the Takwane Scriptures were dedicated! Jeff and Peg were able to go back for that amazing celebration. Pray that God’s Word continues to bear fruit among the Takwane people. 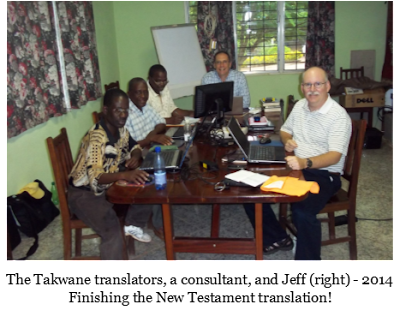 God has provided in overwhelming ways this past month by adding new financial partners for my Wycliffe ministry. Thank you for your prayers and for responding to His call. You have a huge part in what the Lord is doing as He transforms lives through the translated Word!

There are some little details to be worked out here and in Indiana, so my December travel dates are uncertain. I am looking forward to connecting with many of you and celebrating the Joy of Jesus’ coming!

Want to receive updates by email?