July was such a diverse and wonderful month. The first week, I helped facilitate meals for a group of 19 teachers, many of whom are leaving within the next few weeks to take their places in MK schools around the world, serving the families of Bible translation workers. Then there were two groups of returning colleagues with us—the first group of 18 stateside adults and 18 MKs; then a second group of 26 furloughing adults and 31 MKs. 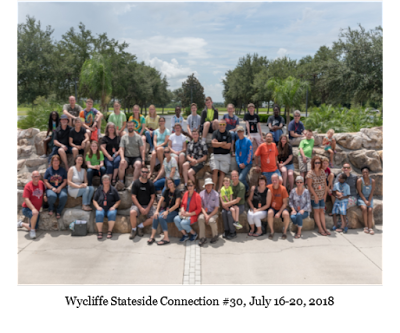 I had the joy of seeing some colleagues I had coached during their initial time of building teams of prayer and financial partners. It was a blessing to hear of how God has been using them. One colleague works on a team that has been designing and building micro-computers that fit on a USB drive. The drives can do all kinds of diagnostics in hard-to-reach locations where the internet is limited. Another couple has been working with signed languages in Asia and has great vision for the Deaf who have not yet been reached with God’s Good News. Spending time again with these co-workers after four or five years was a great honor. It was a thrill to see them thriving in their roles. As you have prayed and given for my Wycliffe ministry, your ministry still extends through them—all of us working together to accelerate Bible translation. Thank you for your partnership!

Thanks for your prayers about the cortisone injections. God has been answering. I was able to get the first round on July 13, as new appointment times opened up. Then I had a second round on July 31. Both brought about significant relief and improvement. I will have an additional treatment near the end of August. I am grateful for knowledgeable and capable medical professionals and for your prayers and encouragements!