July 1, 2016 is a monumental day for the Takwane-speaking people of Mozambique (tak-WAH-nee). By the time you read this, they will be well into their celebration for the dedication of the Takwane New Testament!

Wycliffe missionaries who have been primary workers on the Takwane Bible are Jeff & Peg Shrum. The Shrums were instrumental in development of the alphabet and written form of the language.

Some of my first awareness of Wycliffe Bible Translators came years ago as I got to know Jeff & Peg while they “furloughed” in Indianapolis. I had opportunity to partner with them by “snail” mailing newsletters on their behalf when they were overseas. I even got to dabble in a little Takwane by helping produce pocket calendars they distributed as gifts… some of the first items ever printed in that language. 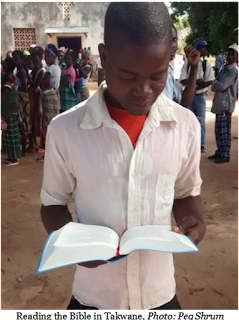 I want to celebrate July 1 with great joy! Those Takwane who are believers now have a clear way to more understanding of who God is and how much He loves us; those who do not yet know Jesus have opportunity to hear the truth clearly in their mother tongue.

However, I also cannot imagine what it would be like to have lived my entire life without access to the Scriptures in the language spoken in my home as I grew up. I invite you to join me in asking God to meet the need of millions around the world… to speed Bible translation, so that no one will be without opportunity to fully comprehend God’s message of grace to them.
at 6:26 AM